For example, events were shown, the people all over the world showed how they watched the stream together, that was just mega. We also sat together, talked, ate together and watched the stream, a good thing that would take you further technically and humanly. One topic that was particularly interesting to us and ultimately came with very good innovations was Xamarin. With Xamarin, it's relatively easy to create native cross-platform apps, the code is written in Xamarin with C, but Xamarin basically makes three individual apps for each platform (iOS, Android, and UWP). These apps are operated on a cloud-based basis, a viable way that is increasingly chosen today and is often also the better solution. 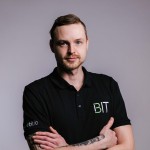